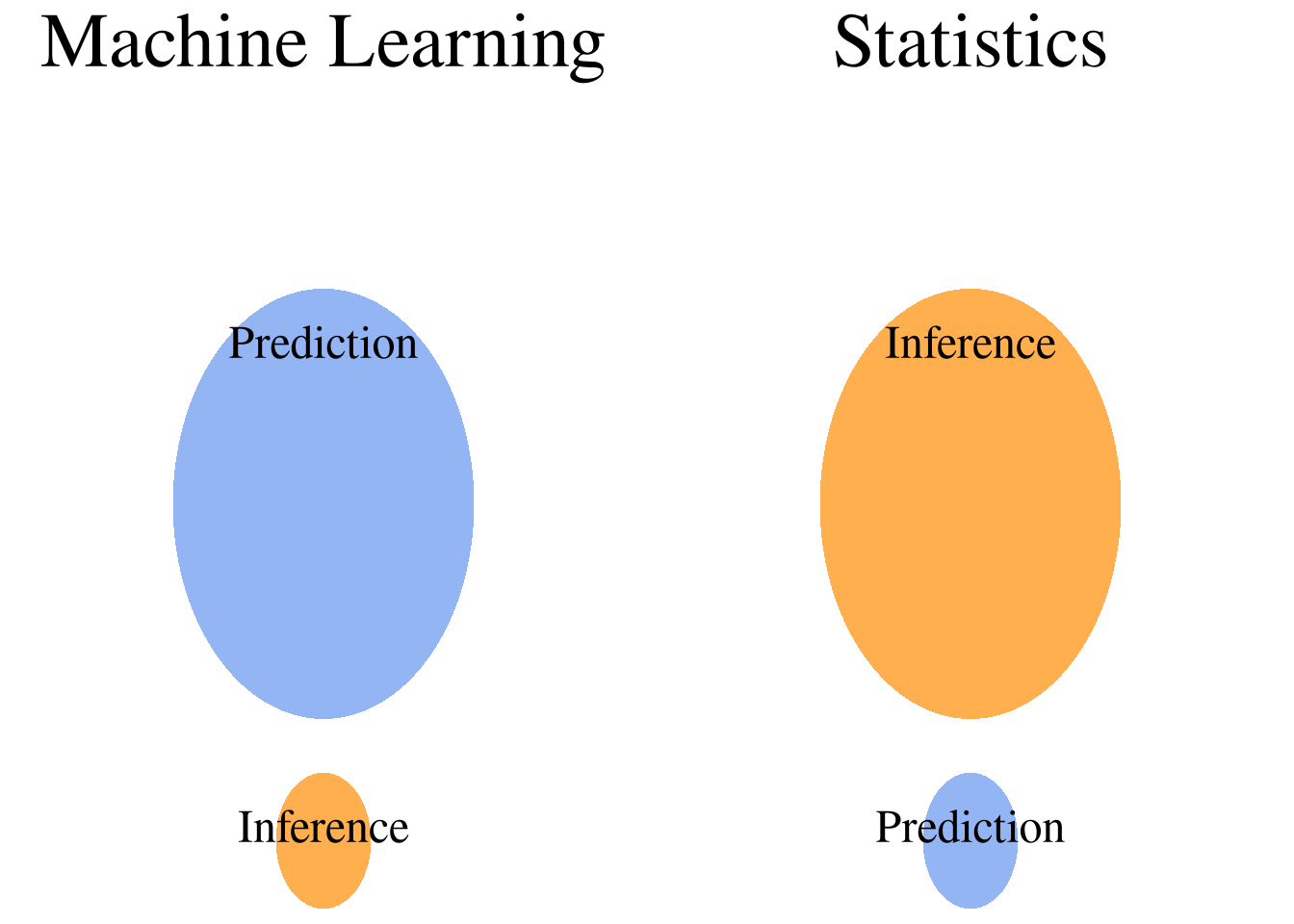 The terms inference and prediction both describe tasks where we learn from data in a supervised manner in order to find a model that describes the relationship between the independent variables and the outcome. Inference and prediction, however, diverge when it comes to the use of the resulting model:

Since inference and prediction pursue contrasting goals, specific types of models are associated with the two tasks.

Model interpretability is a necessity for inference

Only a subset of interpretable methods is useful for inference. For example, linear SVMs are interpretable because they provide a coefficient for every feature such that it is possible to explain the impact of individual features on the prediction. However, SVMs do not allow for estimating the uncertainty associated with the model coefficients (e.g. the variance) and it is not possible to obtain an implicit measure of model confidence. Note that SVMs are capable of outputting probabilities but these probabilities are just a transformation of the decision values and are not basted on the confidence associated with the parameter estimates. This is why even interpretable methods such as linear SVMs and decision trees are unsuitable for inference.

In contrast, consider linear regression, which assumes that the data follow a Gaussian distribution. These models determine the standard error of the coefficient estimates and output confidence intervals. Since linear regression allows us to understand the probabilistic nature of the data generation process, it is a suitable method for inference. Bayesian methods are particularly popular for inference because these models can be adjusted to incorporate various assumptions about the data generation process.

Examples for prediction and inference

Workflows for inference and prediction

The basic workflows for inference and prediction are described in the following sections.

Note that machine learning is often concerned with predictive modeling, while the statistical community often relies on stochastic models that perform inference. Due to the complexity of machine learning models, they are often treated as black boxes. For inference problems, on the other hand, the working principles of used models are well understood.

In his famous 2001 paper, Leo Breiman argued that there are three revolutions in the modeling community, which are represented by the following terms:

Blessing or curse of dimensionality?

Predictive modeling particularly embraces the idea that high dimensionality is a blessing. All of the recently developed popular machine learning models such as neural networks and SVMs rely on the idea of expanding the feature space in order to learn about the non-linear relationships between the independent variables. As a consequence, these models can also be thought to violate Occam’s razor because these models do not utilize compact representations of the variables but rely on partially redundant encodings.

Generative modeling, on the other hand, is often concerned with feature elimination in order to allow for improved interpretability and generalizability. Since these methods strive for simple models for explaining the data generation process with few features, they simultaneously fulfill Occam’s razor and circumvent the curse of dimensionality.

Models based on feature selection are, however, much more affected by Rashomon, the multiplicity of appropriate models. Imagine you are doing generative modeling and the original data set contains 10,000 features. Using a notion of variable importance, you reduce the number of features down to 100. You then interpret the resulting model according to the 100 features. Now, the question is: Is this model the only way to view the data generation process?

Probably not because, stochastically, it is likely that there exists another model with a different set of 100 features that explains the outcome similarly well. This is due to the existence of a huge number of subsets with exactly 1000 features, namely \({100\,000 \choose 100} = 10^{2430}\). Thus, when performing feature selection, small perturbations in the data may lead to the selection of a model using a different feature subset.

Prediction and inference can be differentiated according to the following criteria:

So what can the communities of predictive and generative modeling learn from each other? In my opinion, practitioners of machine learning should spend more time with the data in order to make well-informed decisions about the type of predictive model that is used. In many prediction scenarios, well-established methods such as SVMs or neural networks are used without thinking about the alternatives according to the saying if all you have is a hammer, everything looks like a nail. However, there may be other models that may be more appropriate to a given data set, for example because they perform better, allow for improved generalizability, or because they are more interpretable.

Additionally, there should be more skepticism about the dogmatic use of the test error as the sole measure of model validity. Particularly in settings where the test set is similar to the training data, a low test error may not guarantee a low generalization error. Finally, further effort should be made in order to peel away some of the layers of dark color that render predictive models intransparent.

In the inference setting, model performance should be included as a criterion for the evaluation of model validity since it is hazardous to draw conclusions from an inaccurate model. If the validity of a model has not been sufficiently established, all interpretations should be taken with a grain of salt and it may be worth to investigate the perspectives that other models offer. Additionally, model assumptions should be well argumented rather than assuming a certain distribution (e.g. normal) for mere convenience.

About Matthias Döring
Matthias Döring is a data scientist and AI architect. He is currently driving the digitization of the German railway system at DB Systel. Previously, he completed a PhD at the Max Planck Institute for Informatics in which he researched computational methods for improving treatment and prevention of viral infections.

One of the most crisp, yet informative articles covering every possible aspect related to the search query. Kudos!

The interpretation of inference seems to be a bit narrow. For engineering tasks, we use inference to determine the system state. For example, we want to know if a machine is faulty or if there is a disease present in the human body. Therefore, we use the methods, which, in the article, were referred to as being used for prediction, for inference.