ANOVA stands for analysis of variance and indicates that test analyzes the within-group and between-group variance to determine whether there is a difference in group means.

The ANOVA test has three assumptions:

To show how the test statistic is computed, we’ll transform the data set from long to wide format. For this purpose, we’ll add an ID column to indicate which entries belong into one row (note that this pairing of measurements is arbitrary and not relevant for the test):

The ANOVA test statistic is based on the between-group and the within-group mean-squared value.

The sum of squared differences between the groups is:

The within-group sum of squares is defined as

The value of \(SS_W\) can be understood as the squared sum of the column entries after centering them using \(\overline{X}_j\). Its value indicates the variance of measurements within the groups. The within-group mean-squared value is obtained by dividing \(SS_W\) by the within-group degrees of freedom, \(\sum_{j=1}^p n_j - 1\):

The F-statistic is the test statistic of the ANOVA test. It is defined as the ratio of the between-group and the within-group mean squared value:

The null hypothesis (groups have equal means) can be rejected if \(F\) is sufficiently large. In this case, \(MS_B\) is considerably larger than \(MS_W\). In this case, there are large differences between the means of the groups at a low variance within the groups.

Performing the ANOVA test in R

Before performing an ANOVA test, one should first confirm whether group variances are homogeneous. After running the test, it should be confirmed that the test residuals are normal.

To verify whether the variances are homogeneous across groups, we’ll generate a box plot of the insect counts: 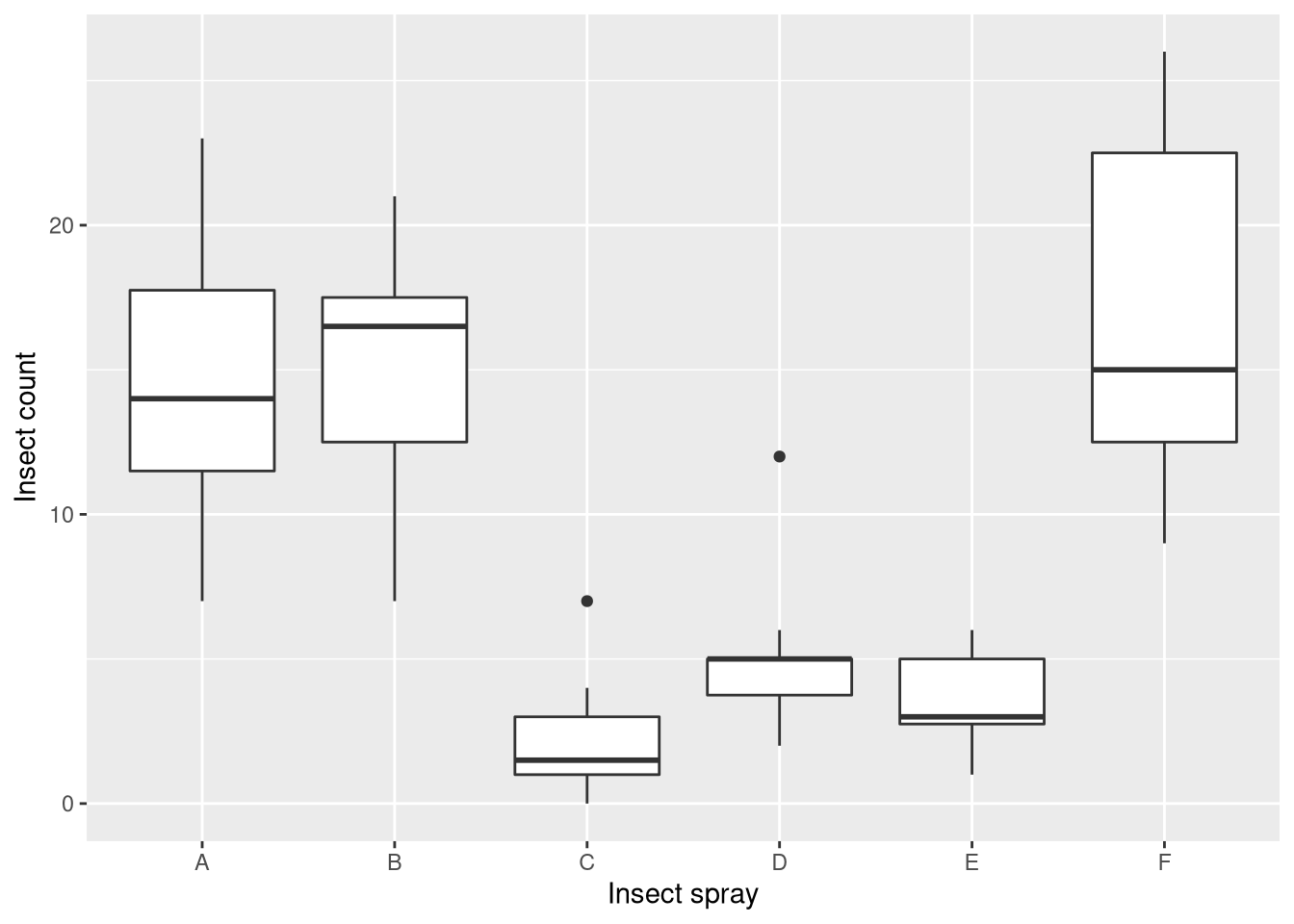 What we find is that sprays A, B, and F outperform sprays C, D, and E. Moreover the counts for A, B, and F have much higher variance than for the other sprays (the measurements are heteroscedastic). Thus, we will use the square-root transformation on the insect counts, which is a suitable variance-stabilizing transformation for count data. You can see the effect of the transformation here: 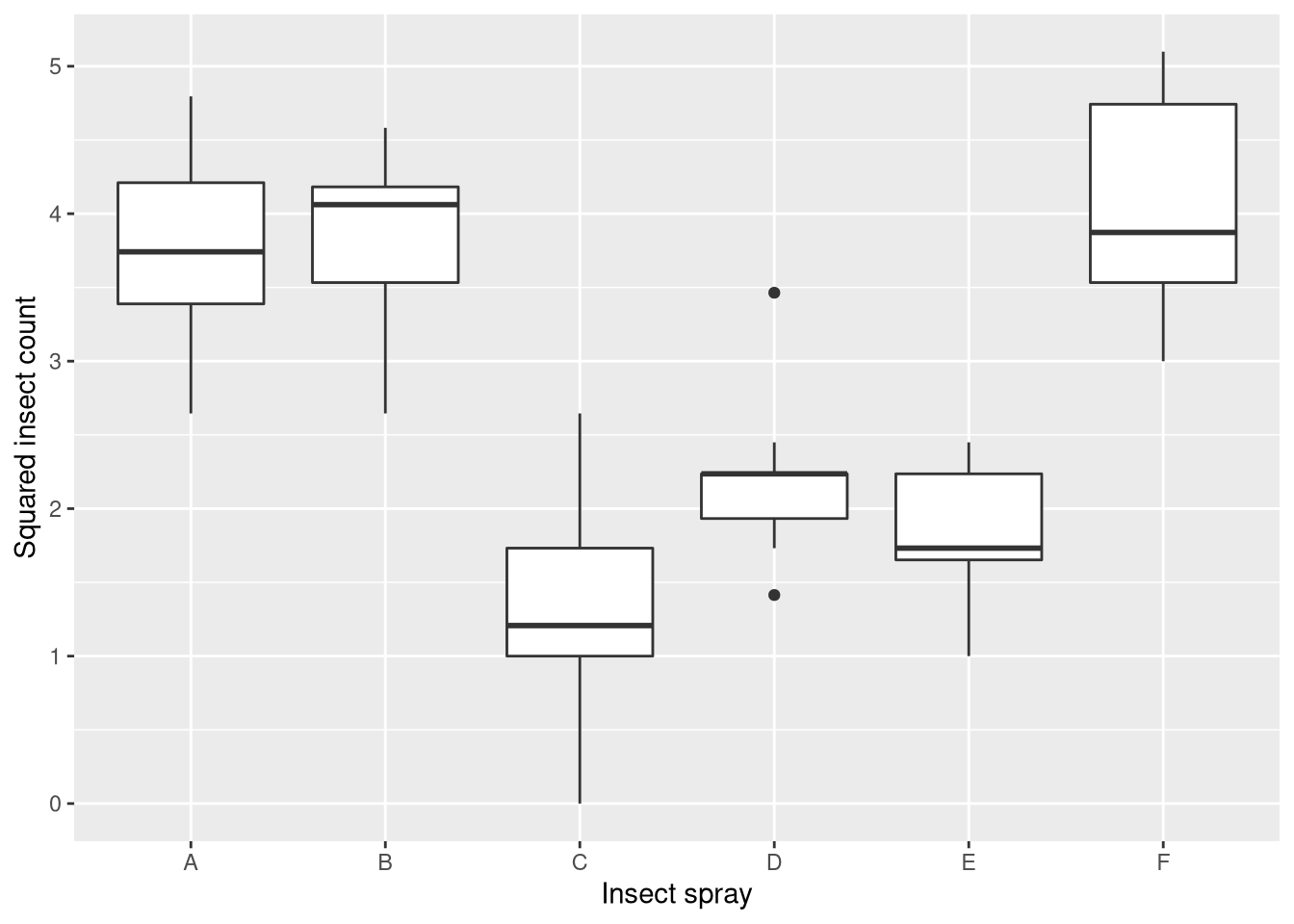 We can create the ANOVA model using the aov function by specifying a formula that indicates the variables and a corresponding data set:

Verifying whether residuals are normal

Based on spray.model, we can use the plot function to verify whether the residuals are normally distributed: 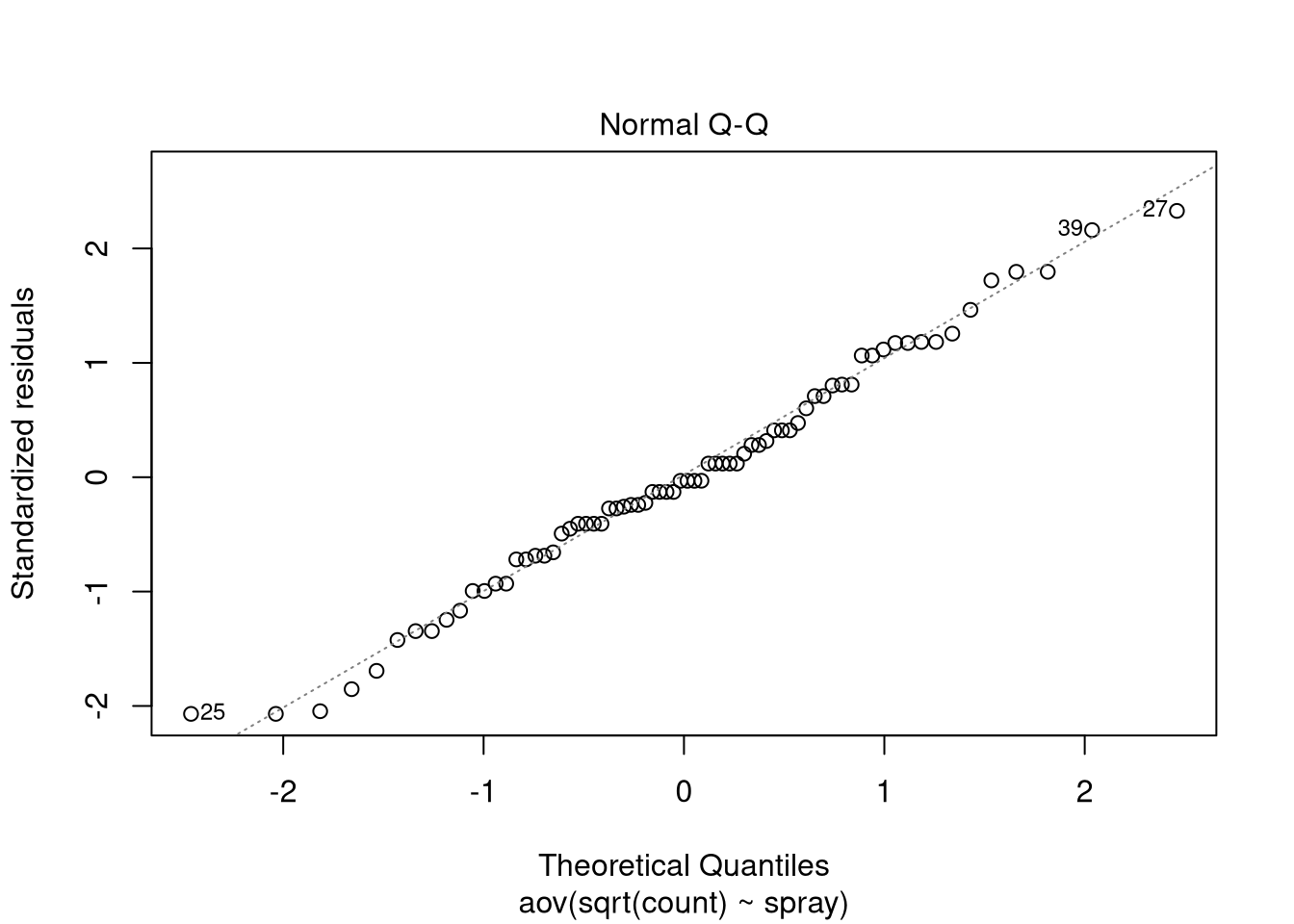 The linear trend in the measurements indicate that the residuals are normally distributed, so we can continue with retrieving the test results:

The low p-value indicates that there is a significant different in the means of insect counts for different insect sprays.

Non-parametric testing with the Kruskal-Wallis test

If the assumptions of the ANOVA test do not hold, one can use a non-parametric ANOVA test, the Kruskal-Wallis test. In contrast to the parametric version of the test, Kruskal-Wallis test compares the medians of the groups rather than the means. Since the test is an extension of the Wilcoxon rank-sum test, their test statistics are computed in a similar manner. After ranking all observations, the test statistic can be obtained as:

Applying the Kruskal-Wallis test in R

The Kruskal-Wallis test can be applied in the following way:

Again, the p-value indicates significance at a significance level of 5%. This time, however, the test result indicates that there is a difference in the median insect count across the groups rather than their means.

ANOVA is used to compare the mean/median of measurements across several groups. If you fulfill the assumptions of the parametric test, you can use the one-way ANOVA. Otherwise, you should use the non-parametric version of ANOVA, the Kruskal-Wallis test.