Interpreting generalized linear models (GLM) obtained through glm is similar to interpreting conventional linear models. Here, we will discuss the differences that need to be considered.

We will take 70% of the airquality samples for training and 30% for testing:

For investigating the characteristics of GLMs, we will train a model, which assumes that errors are Poisson distributed.

In terms of the GLM summary output, there are the following differences to the output obtained from the lm summary function:

Moreover, the prediction function of GLMs is also a bit different. We will start with investigating the deviance.

We already know residuals from the lm function. But what are deviance residuals? In ordinary least-squares, the residual associated with the \(i\)-th observation is defined as

For GLMs, there are several ways for specifying residuals. To understand deviance residuals, it is worthwhile to look at the other types of residuals first. For this, we define a few variables first:

We will cover four types of residuals: response residuals, working residuals, Pearson residuals, and, deviance residuals. There is also another type of residual called partial residual, which is formed by determining residuals from models where individual features are excluded. This residual is not discussed here.

For type = "response", the conventional residual on the response level is computed, that is, \[r_i = y_i - \hat{f}(x_i)\,.\] This means that the fitted residuals are transformed by taking the inverse of the link function:

For type = "pearson", the Pearson residuals are computed. They are obtained by normalizing the residuals by the square root of the estimate:

Deviance residuals are defined by the deviance. The deviance of a model is given by

How does such a deviance look like in practice? For example, for the Poisson distribution, the deviance residuals are defined as:

Let us verify this in R:

Note that, for ordinary least-squares models, the deviance residual is identical to the conventional residual.

We can obtain the deviance residuals of our model using the residuals function:

Since the median deviance residual is close to zero, this means that our model is not biased in one direction (i.e. the out come is neither over- nor underestimated).

Since we have already introduced the deviance, understanding the null and residual deviance is not a challenge anymore. Let us repeat the definition of the deviance once again:

The null and residual deviance differ in \(\theta_0\):

How can we interpret these two quantities?

Let us investigate the null and residual deviance of our model:

However, for a well-fitting model, the residual deviance should be close to the degrees of freedom (74), which is not the case here. For example, this could be a result of overdispersion where the variation is greater than predicted by the model. This can happen for a Poisson model when the actual variance exceeds the assumed mean of \(\mu = Var(Y)\).

Other outputs of the summary function

Here, I deal with the other outputs of the GLM summary fuction: the dispersion parameter, the AIC, and the statement about Fisher scoring iterations.

Dispersion (variability/scatter/spread) simply indicates whether a distribution is wide or narrow. The GLM function can use a dispersion parameter to model the variability.

However, for likelihood-based model, the dispersion parameter is always fixed to 1. It is adjusted only for methods that are based on quasi-likelihood estimation such as when family = "quasipoisson" or family = "quasibinomial". These methods are particularly suited for dealing with overdispersion.

The Akaike information criterion (AIC) is an information-theoretic measure that describes the quality of a model. It is defined as

where \(p\) is the number of model parameters and \(\hat{L}\) is the maximum of the likelihood function. A model with a low AIC is characterized by low complexity (minimizes \(p\)) and a good fit (maximizes \(\hat{L}\)).

The information about Fisher scoring iterations is just verbose output of iterative weighted least squares. A high number of iterations may be a cause for concern indicating that the algorithm is not converging properly.

The prediction function of GLMs

The GLM predict function has some peculiarities that should be noted.

Since models obtained via lm do not use a linker function, the predictions from predict.lm are always on the scale of the outcome (except if you have transformed the outcome earlier). For predict.glm this is not generally true. Here, the type parameter determines the scale on which the estimates are returned. The following two settings are important:

Let us see how the returned estimates differ depending on the type argument:

Using the link and inverse link functions, we can transform the estimates into each other:

There is also the type = "terms" setting but this one is rarely used an also available in predict.lm.

Using this function, we get the following confidence intervals for the Poisson model:

Using these functions, we can generate the following plot: 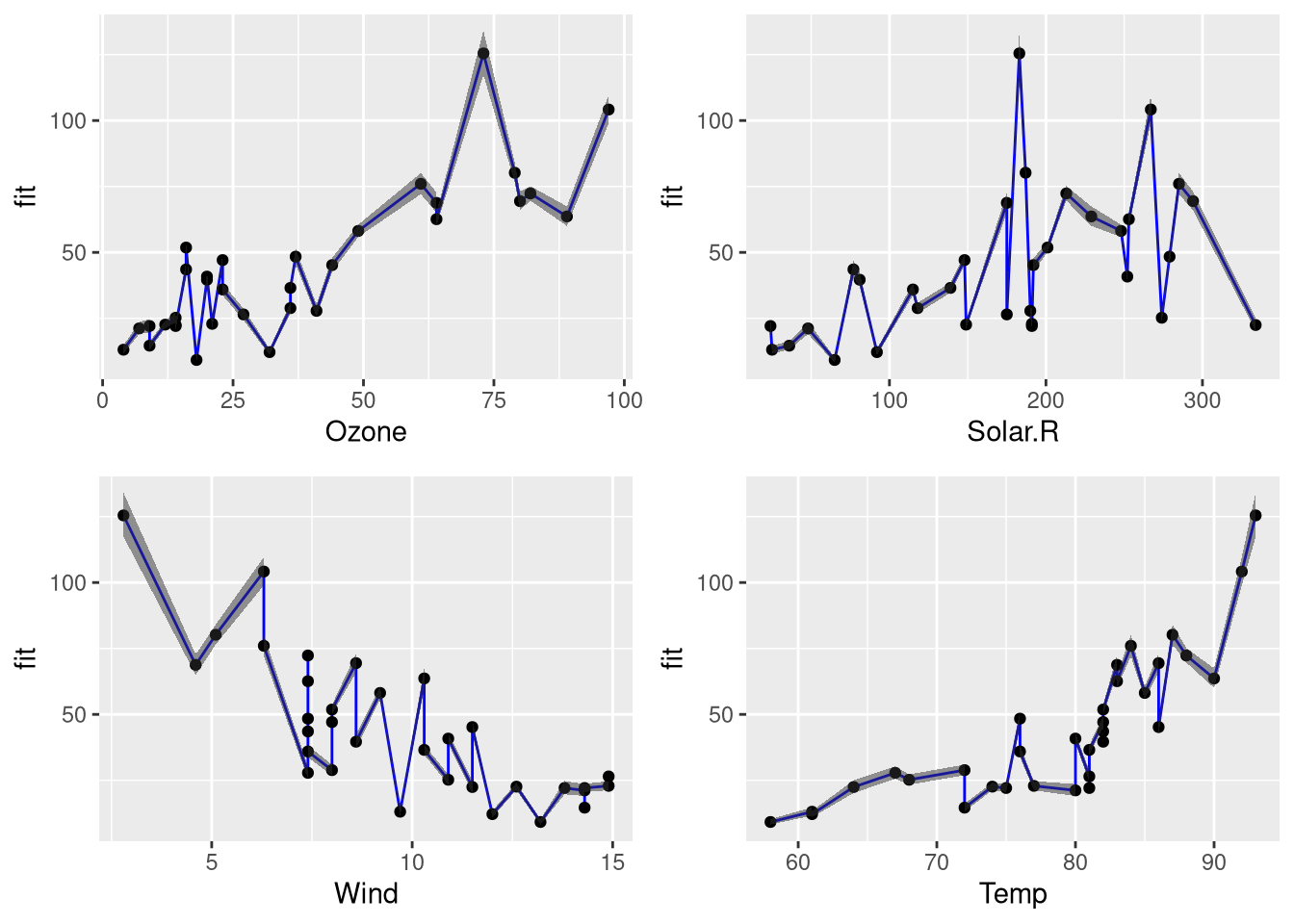 Where to go from here?

Having covered the fundamentals of GLMs, you may want to dive deeper into their practical application by taking a look at this post where I investigate different types of GLMs for improving the prediction of ozone levels.