Using the density, it is possible to determine the probabilities of events. For example, you may wonder: What is the likelihood that a person has an IQ of exactly 140?. In this case, you would need to retrieve the density of the IQ distribution at value 140. The IQ distribution can be modeled with a mean of 100 and a standard deviation of 15. The corresponding density is: 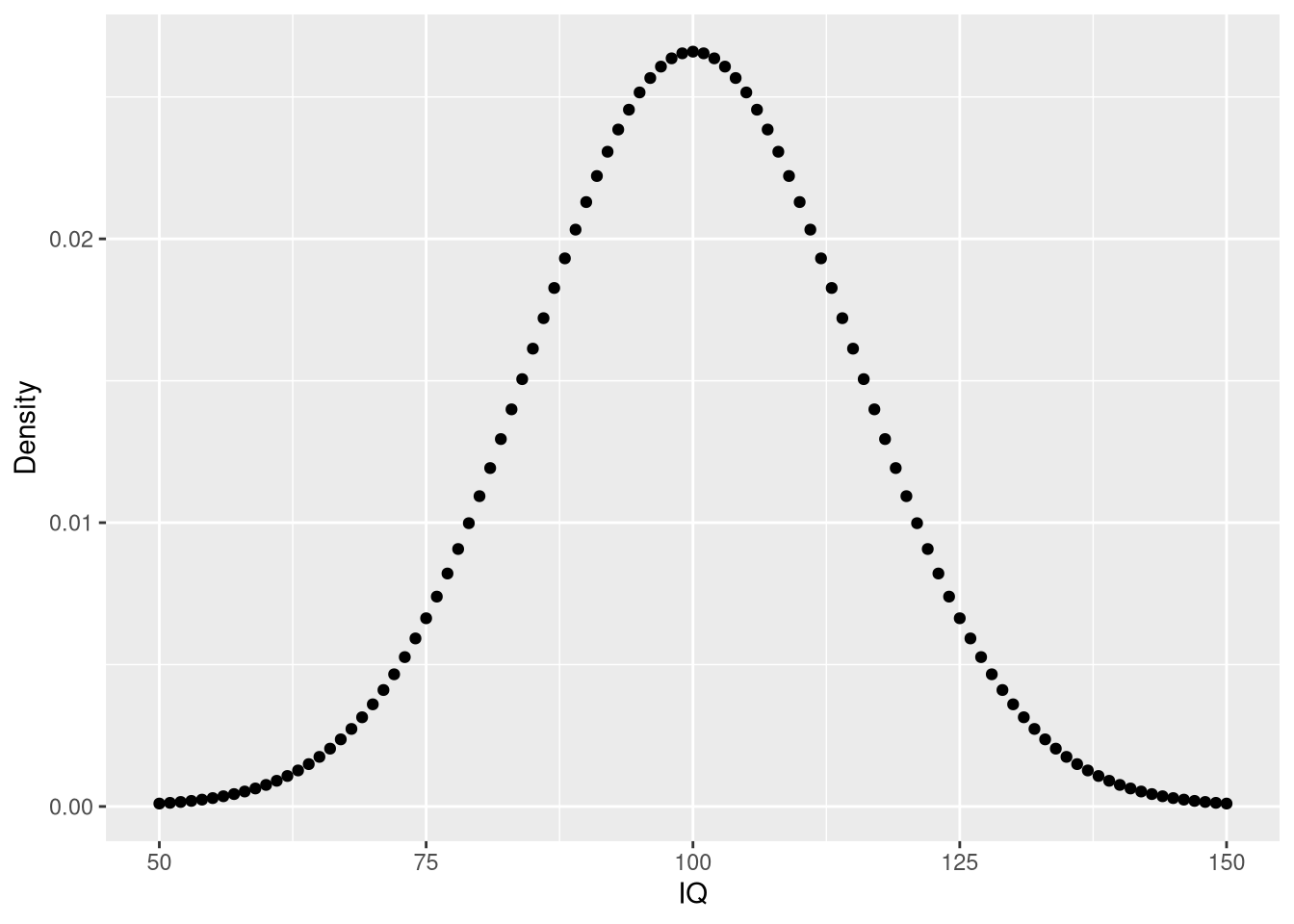 From these data, we can now answer the initial question as well as additional questions:

To get an intuition of the CDF, let’s create a plot for the IQ data: 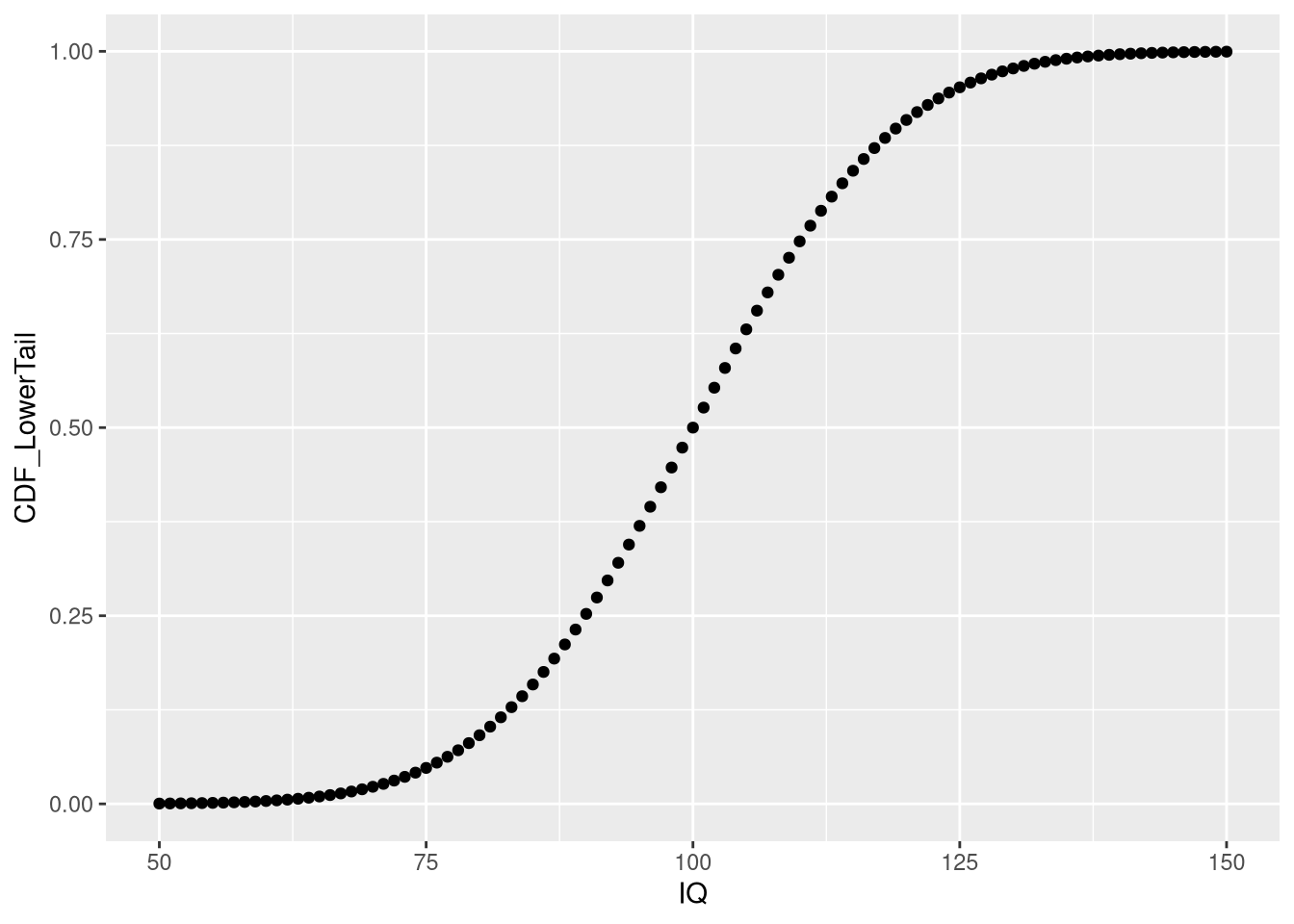 As we can see, the depicted CDF shows the probability of having an IQ less or equal to a given value. This is because pnorm computes the lower tail by default, i.e. \(P[X <= x]\). Using this knowledge, we can obtain answers to some of our previous questions in a slightly different manner:

Note that the results from pnorm are the same as those obtained from manually summing up the probabilities obtained via dnorm. Moreover, by setting lower.tail = FALSE, dnorm can be used to directly compute p-values, which measure how the likelihood of an observation that is at least as extreme as the obtained one.

To remember that pnorm does not provide the PDF but the CDF, just imagine that the function carries a p in its name such that pnorm is lexicographically close to qnorm, which provides the inverse of the CDF. 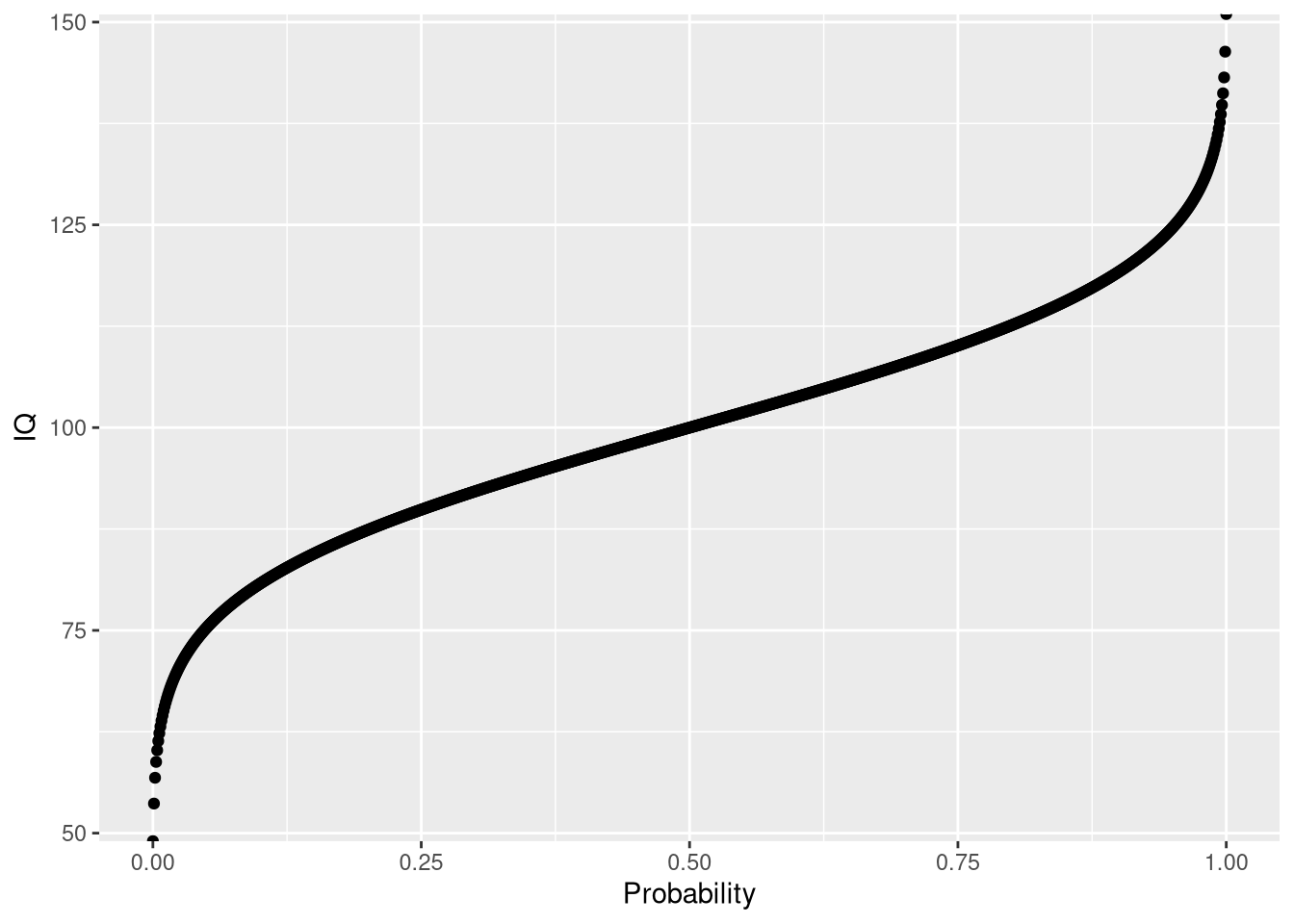 Using the quantile function, we can answer quantile-related questions: 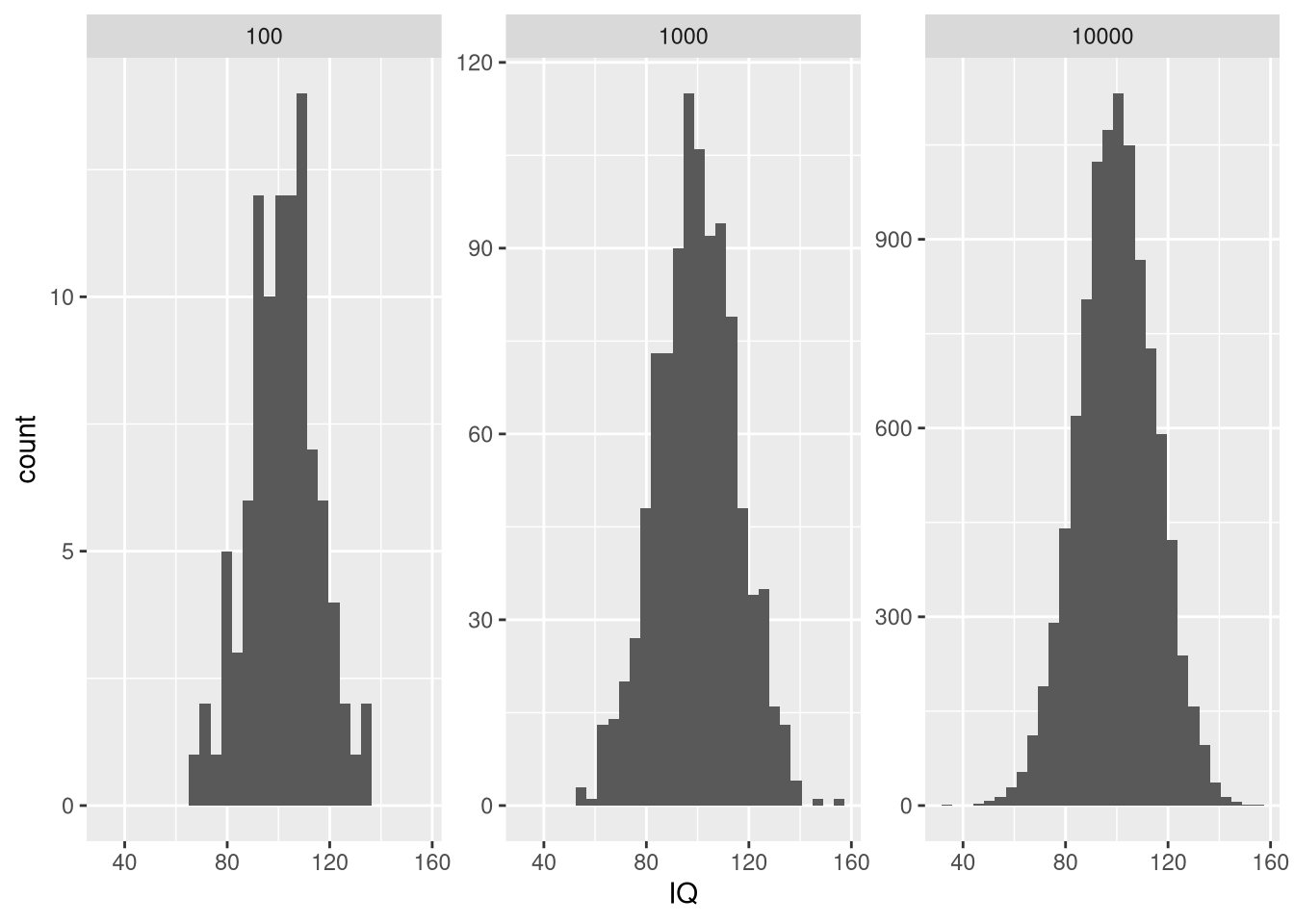 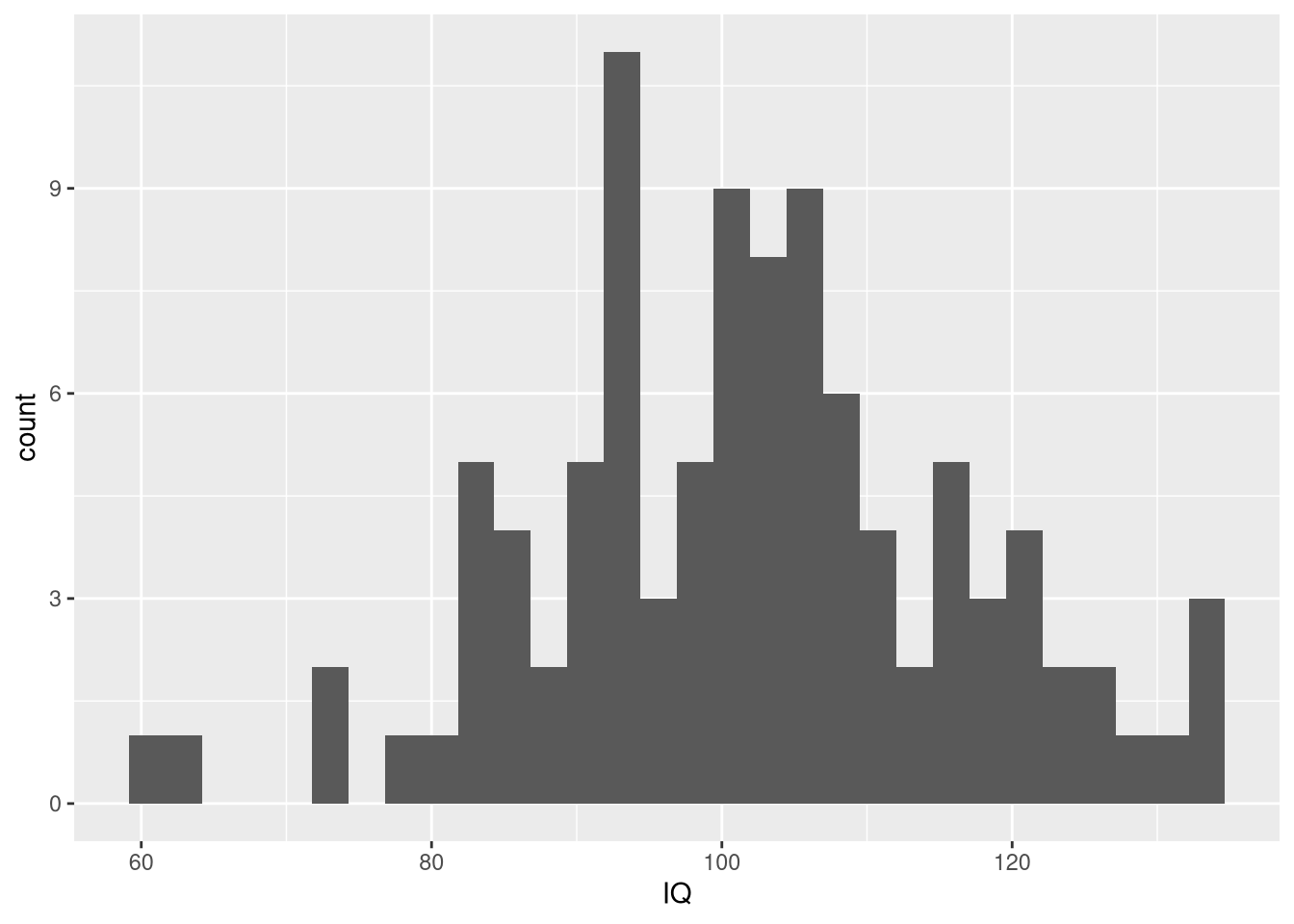 Note that we called set.seed in order to ensure that the random number generator always generates the same sequence of numbers for reproducibility.

Perhaps I’m wrong, but it seems to me that there is a mistake in the interpretation of the density function. With continuous random variables, the probability of having an IQ of 140 is not the value of the density function at 140. Technically, the probability of having a specific value with a continuous r.v. is always zero. If one wants to makes an approximation, then he would write

The small interval around 140 which we use to make our calculations with, will depend on the level of precision with which we make our measurements, I believe.