What are contingency tables?

Contingency tables provide the integer counts for measurements with respect to two categorical variables. The simplest contingency table is a \(2 \times 2\) frequency table, which results from two variables with two levels each:

Given such a table, the question would be whether Group 1 exhibits frequencies with respect to the observations than Group 2. The groups represents the dependent variable because they depend on the observation of the independent variable. Note that it is a common misconception that contingency tables must be \(2 \times 2\); they can have an arbitrary number of dimensions, depending on the number of levels exhibited by the variables. Still, performing statistical tests on contingency tables with many dimensions should be avoided because, among other reasons, interpreting the results would be challenging.

To study tests on contingency tables, we will use the warpbreaks data set:

This is a data set with three variables originating from the textile industry: breaks describes the number of times there was a break in a warp thread, \(\text{wool} \in \{A, B\}\) describes the type of wool that was tested, and \(\text{tension} \in \{L, M, H\}\) gives the tension that was applied to the thread (either low, medium, or high). Each row in the data set indicates the measurements for a single loom. To account for the variability of different looms, 9 measurements were performed for each combination of wool and tension, the data set contains a total of \(9 \cdot 2 \cdot 3 = 54\) observations.

Goal of the analysis

We would like to identify whether one type of wool outperforms the other for different levels of tensions. To investigate whether we can find some evidence for differences, let’s take a look at the data:

To investigate the differences in the number of strand breaks, let’s visualize the data: 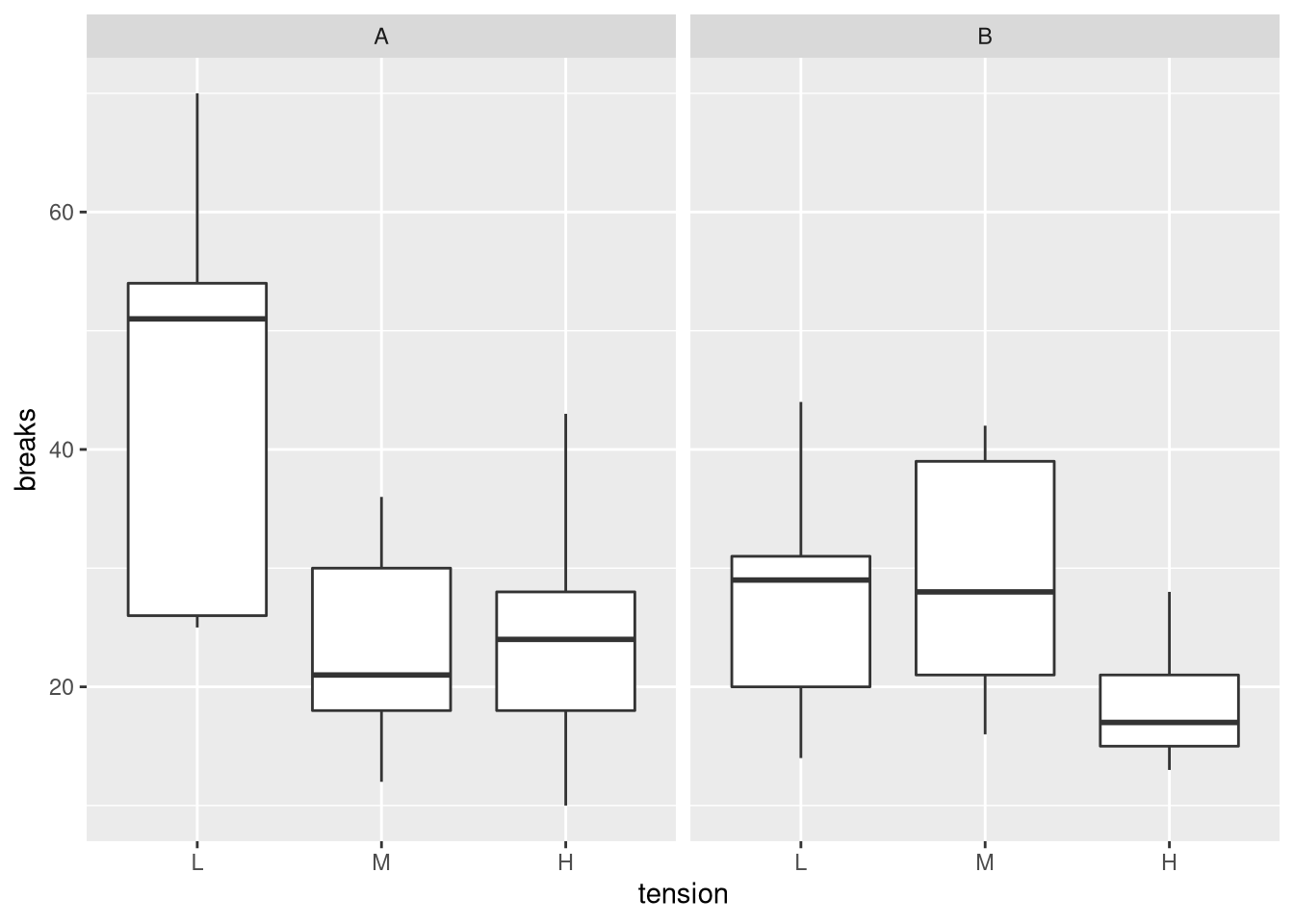 From the plot, we can see that, overall, wool B is associated with fewer breaks. Wool A seems to be particularly inferior for low tensions.

To obtain a contingency table, we first need to summarize the breaks across different looms for the two types of wool and the three types of tension.

We then use the xtabs (pronounced as crosstabs) function to generate the contingency table:

Now, df has the structure we need for applying statistical tests.

The two most common tests for determining whether measurements from different groups are independent are the chi-squared test (\(\chi^2\) test) and Fisher’s exact test. Note that you should use McNemar’s test if the measurements were paired (e.g. individual looms could be identified).

The \(\chi^2\) test is a non-parametric test that can be applied to contingency tables with various dimensions. The name of the test originates from the \(\chi^2\) distribution, which is the distribution for the squares of independent standard normal variables. This is the distribution of the test statistic of the \(\chi^2\) test, which is defined by the sum of chi-square values \(\chi_{i,j}^2\) for all pairs of cells \(i,j\) arising from the difference between a cell’s observed value \(O_{i,j}\) and the expected value \(E_{i,j}\), normalized by \(E_{i,j}\):

Since the p-value is less than 0.05, we can reject the null hypothesis of the test (the frequency of breaks is independent of the wool) at the 5% significance level. Based on the entries of df one could then claim that wool B is significantly better (with respect to warp breaks) than wool A.

Fisher’s exact test is a non-parametric test for testing independence that is typically used only for \(2 \times 2\) contingency table. As an exact significance test, Fisher’s test meets all the assumptions on which basis the distribution of the test statistic is defined. In practice, this means that the false rejection rate equals the significance level of the test, which is not necessarily true for approximate tests such as the \(\chi^2\) test. In short, Fisher’s exact test relies on computing the p-value according to the hypergeometric distribution using binomial coefficients, namely via

Since the computed factorials can become very large, Fisher’s exact test may not work for large sample sizes.

Note that it is not possible to specify the alternative of the test for df since the odds ratio, which indicates the effect size, is only defined for \(2 \times 2\) matrices:

We can still perform Fisher’s exact test to obtain a p-value:

The resulting p-value is similar to the one obtained from the \(\chi^2\) test and we arrive at the same conclusion: we can reject the null hypothesis that the type of wool is independent of the number of breaks observed for different levels of stress.

Conversion to 2 by 2 matrices

To specify the alternative hypothesis and obtain the odds ratio, we could compute the test for the three \(2 \times 2\) matrices that can be constructed from df:

Since the alternative is set to greater, this means that we are performing a one-tailed test where the alternative hypothesis is that wool A is associated with a greater number of breaks than wool B (i.e. we expect \(OR > 1\)). By performing tests on \(2 \times 2\) tables, we also gain interpretability: we can now distinguish the specific conditions under which the wools are different. Before interpreting the p-values, however, we need to correct for multiple hypothesis testing. In this case, we have performed three tests. Here, we’ll simply adjust the initial significance level of 0.05 to \(\frac{0.05}{3} = 0.01\overline{6}\) according to the Bonferroni method. Based on the adjusted threshold, the following tests were significant:

This finding indicates that wool B is only significantly superior to wool A if the stress is light. Note that we could have also the approach of constructing \(2 \times 2\) matrices for the \(\chi^2\) test. With the \(\chi^2\) test, however, this wasn’t necessary because we based our analysis on residuals.

Here is a summary of the properties of the two tests:

Thank you for this post. Why do you say that “chi-square test is more suitable for contingency tables greater than 2x2”? As far as I know, the Fisher’s exact test also works with such tables. Is there any statistical reason for choosing chi-square in these cases?

Dear Hugo, You’re right - Fisher’s exact test also works with tables with dimensionality greater than 2x2. What I meant with my statement is that the application of Fisher’s exact test to larger tables is not as straightforward as the chi-squared test. When the dimensionality exceeds 2x2, Fisher’s exact test quickly becomes computationally infeasible. Then, the p-value cannot be calculated exactly anymore but one has to resort to Monte Carlo simulation (simulate.p.value=TRUE when calling fisher.test). Of course, this shouldn’t stop you from using the test if you expect that a non-parametric test is more appropriate.