Recently, I have introduced sensitivity and specificity as performance measures for model selection. Besides these measures, there is also the notion of recall and precision. Precision and recall originate from information retrieval but are also used in machine learning settings. However, the use of precision and recall can be problematic in some situations. In this post, I discuss the shortcomings of recall and precision and show why sensitivity and specificity are generally more useful.

For a binary classification problems with classes 0 and 1, the resulting confusion matrix has the following structure:

The advantage of sensitivity and specificity

Sensitivity and specificity can be summarized by a single quantity, the balanced accuracy, which is defined as the mean of both measures:

The balanced accuracy is in the range \([0,1]\) where a values of 0 and 1 indicate whe worst-possible and the best-possible classifier, respectively.

The disadvantage of recall and precision

Evaluating a model using recall and precision does not use all cells of the confusion matrix. Recall deals with true positives and false negatives and precision deals with true positives and false positives. Thus, using this pair of performance measures, true negatives are never taken into account. Thus, precision and recall should only be used in situations, where the correct identification of the negative class does not play a role. This is why these measures originate from information retrieval where precision can be defined as

Here, it does not matter at which rate irrelevant documents are correctly discarded (true negative rate) because it is of no consequence.

Precision and recall are often summarized as a single quantity, the F1-score, which is the harmonic mean of both measures:

Here, I provide two examples. The first examples investigates what can go wrong when precision is used as a performance metric. The second example shows a setting in which the use of precision is adequate.

What can go wrong when using precision?

Precision is a particularly bad measure when there are few observations that belong to the positive class. Let us assume a clinical data set in which \(90\%\) of persons are diseased (positive class) and only \(10\%\) are healthy (negative class). Let us assume we have developed two tests for classifying whether a patient is diseased or healthy. Both tests have an accuracy of 80% but make different types of errors. 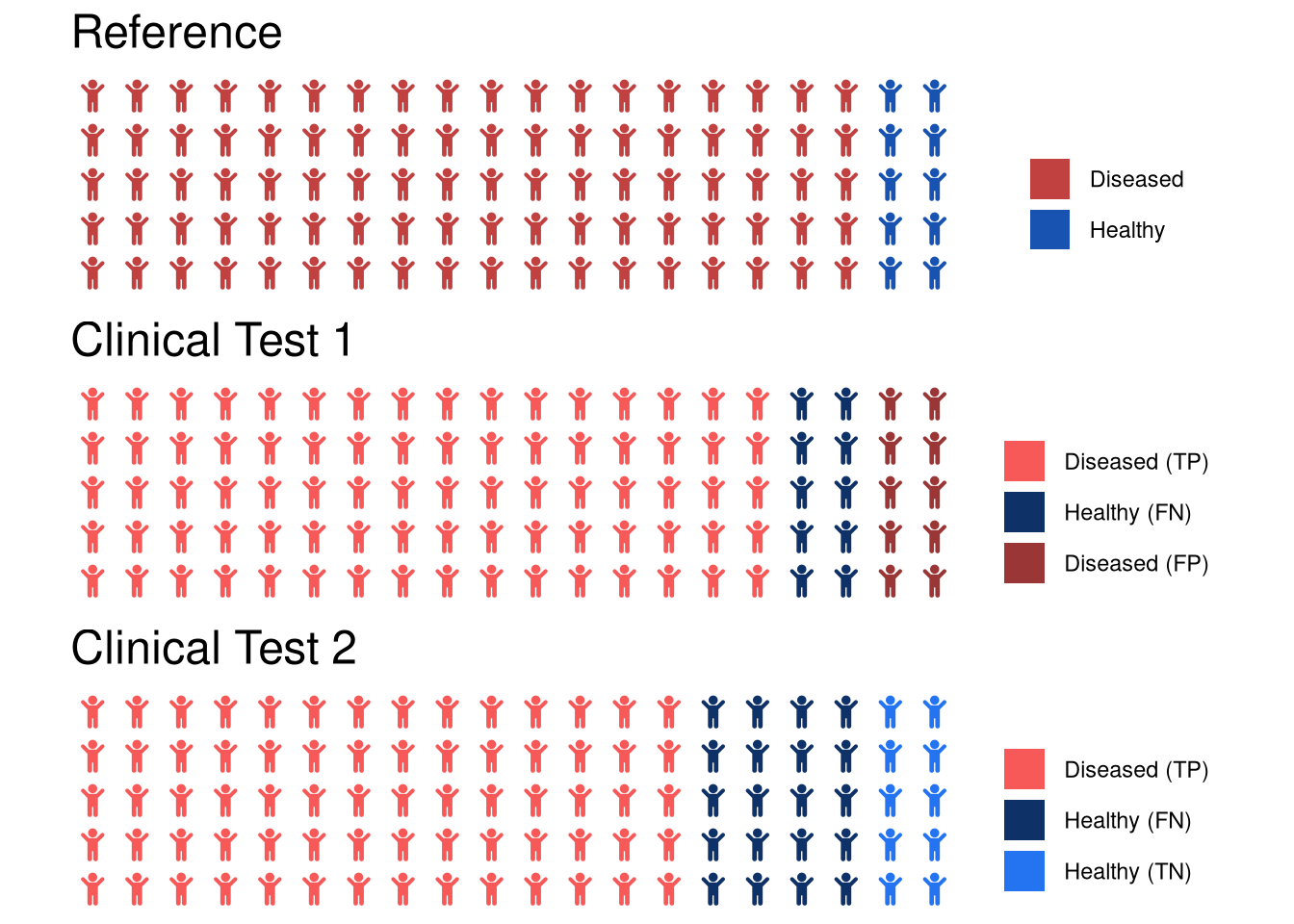 Confusion matrix for the first test

Confusion matrix for the second test

Comparison of the two tests

Let us compare the performance of the two tests:

Using precision and recall, however, the first test would have an F1-score of \(2 \cdot \frac{0.889 \cdot 0.889}{0.889 + 0.889} = 0.889\), while the second test has a lower score of \(2 \cdot \frac{0.777 \cdot 1}{0.777 + 1} \approx 0.87\). Thus, we would find the first test to be superior over the second test although its specificity is a 0%. Thus, when using this test, all of the healthy patients would be classified as diseased. This would be a big problem because all of these patients would undergo severe psychological stress and expensive treatment due to the misdiagnosis. If we had used specificity instead, we would have selected the second model, which does not produce any false postives at a competitive sensitivity.

Use of precision when true negatives do not matter

Let us consider an example from information retrieval to illustrate when precision is a useful criterion. Assume that we want to compare two algorithms for document retrieval that both have have an accuracy of 80%. 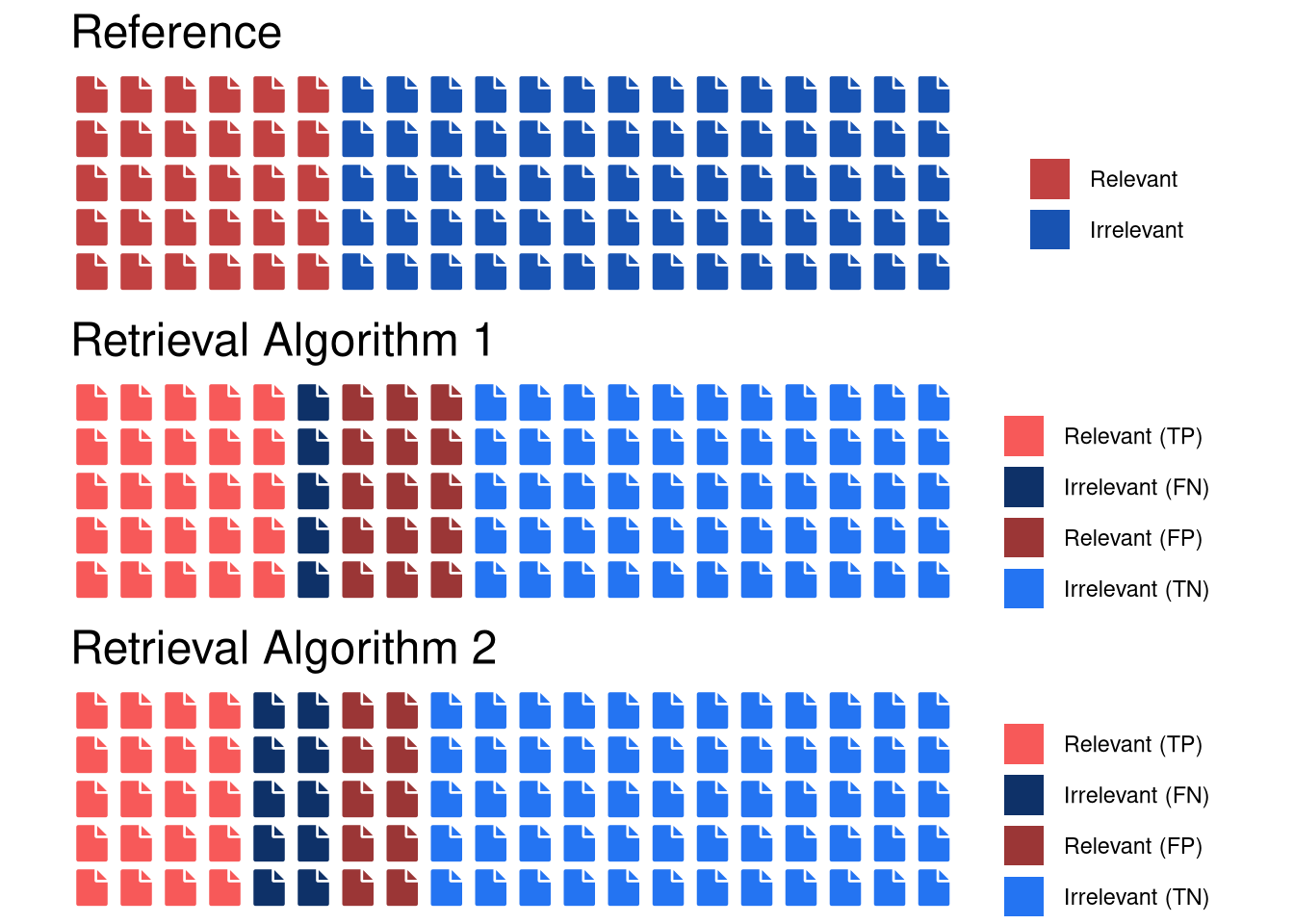 Confusion matrix for the first algorithm

Confusion matrix for the second algorithm

Comparison of the two algorithms

Let us calculate the performance of the two algorithms from the confusion matrix:

In this example, both balanced accuracy and the F1-score would lead to prefering the first over the second algorithm. Note that the reported balanced accuracy is decidedly larger than the F1-score. This is because specificity is high for both algorithms due to the large number of discarded observations from the negative class. Since the F1-score does not consider the rate of true negatives, precision and recall are more appropriate than sensitivity and specificity for this task.

In this post, we have seen that performance measures should be carefully selected. While sensitivity and specificity generally perform well, precision and recall should only be used in circumstances where the true negative rate does not play a role.

Confusion matrix layouts are confusing. ;) Maybe It’s a European thing? I’m used to the top row being TP, FP and columns being “predicted.” Anyways in the last section, I’m getting different sensitivity, specificity, etc values for the second algorithm. I think the counts are off in the confusion matrix. Relevant and Irrelevant totals don’t match the first algorithm totals.

Thanks for your comments Erbo. You’re right about the ordering in the table - the positive class should definitely come first, I just changed this. Regarding the ordering of predicted/reference I’m not sure, I think I have seen both versions, so I will keep it as is. I hope it’s not too confusing ;-) I agree, however, that it would make things much easier if there was really a standard for the format of confusion matrices.

This is an excellent article! There are very few posts out there comparing specificity vs precision approaches from a “Why” perspective and in such a well thought out way. Thank you!

There is a mistake under “What can go wrong when using precision” You say “Precision is a particularly bad measure when there are few observations that belong to the positive class. Let us assume a clinical data set in which 90% of persons are diseased (positive class) and only 10% are healthy (negative class)”

(You’re firstly saying that precision is a bad measure when the positive class is a minority. You then go on to give an example where 90% of population are in positive class.)