For models that are based on the same set of features, RMSE and \(R^2\) are typically used for model selection.

The mean-squared error is determined by the residual sum of squares resulting from comparing the predictions \(\hat{y}\) with the observed outcomes \(y\):

where \(\text{Cov}(\cdot,\cdot) \in \mathbb{R}\) is the covariance and \(\sigma\) is the standard deviation. The covariance is defined as

where \(\mu\) indicates the mean. In discrete settings, this can be computed as

The standard deviation is defined as

which, in discrete settings, can be computed as

To understand covariance better, we create a function that plots the deviation of measurements from the mean: 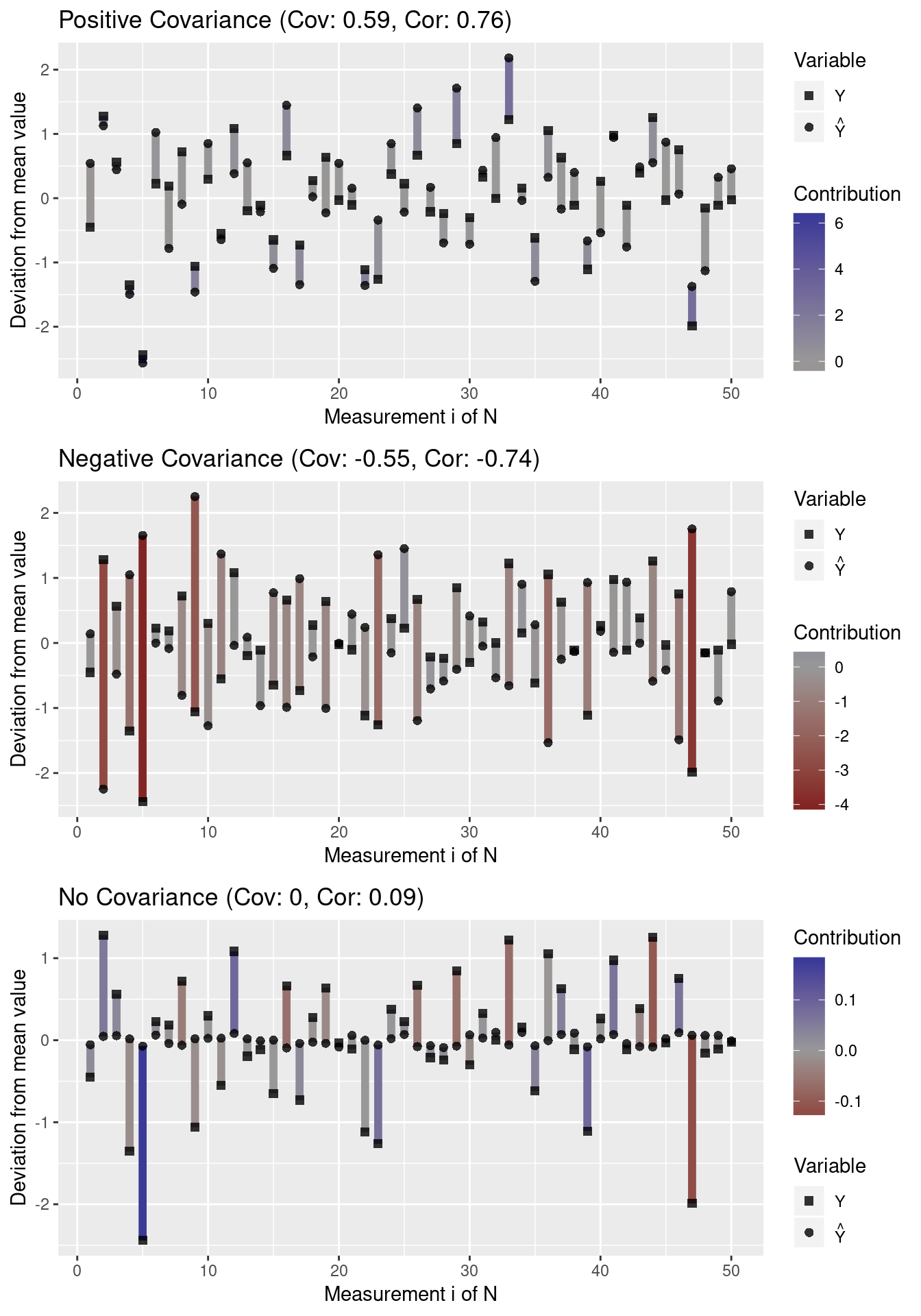 Note that outliers (high deviations from the mean) have a greater impact on the covariance than values close to the mean. Moreover, note that a covariance close to 0 indicates that there does not seem to be an association between variables in any direction (i.e. individual contribution terms cancel out). 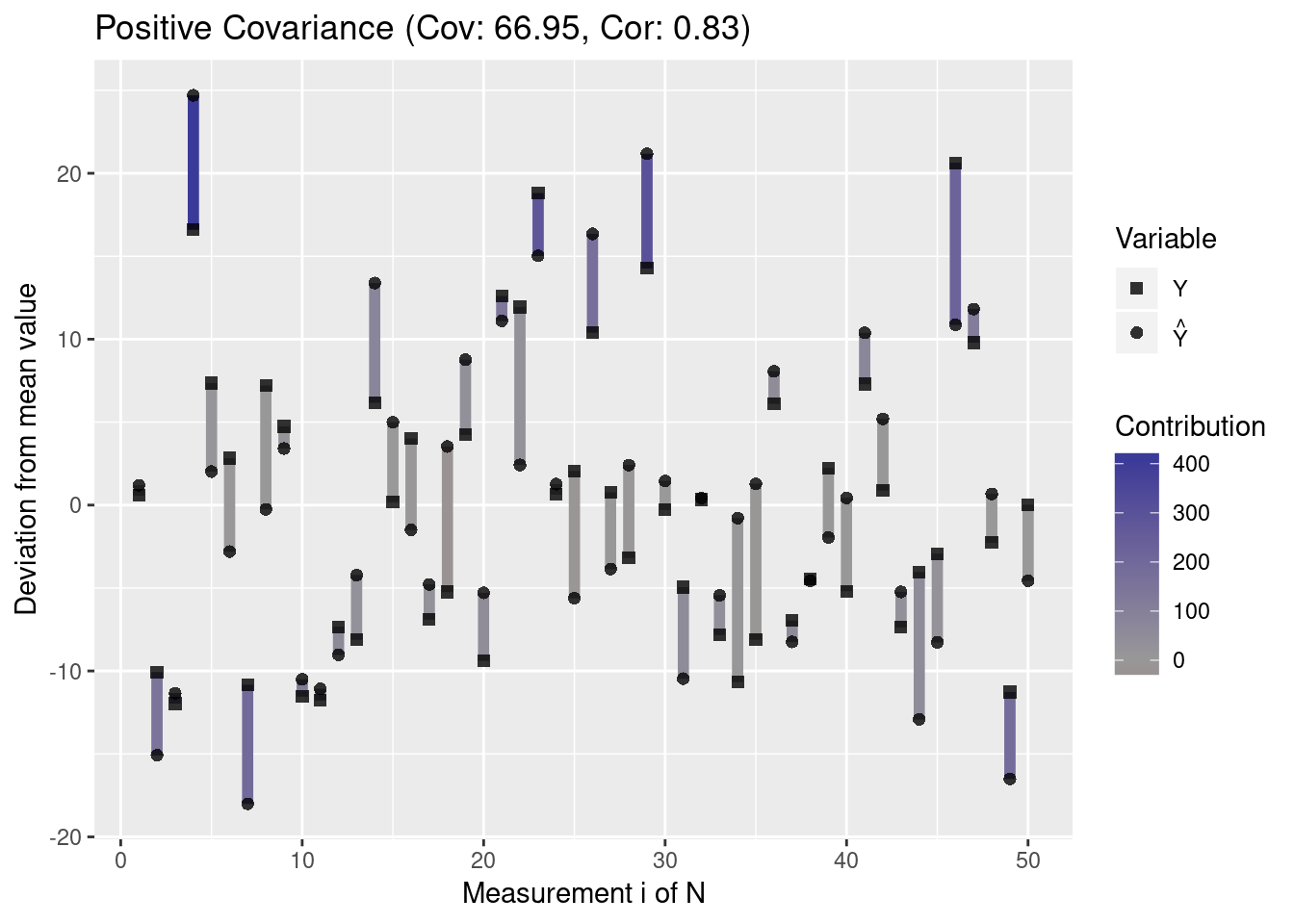 The coefficient of determination

The coefficient of determination, \(R^2\), is defined as

R squared is usually positive since models with an intercept produce predictions \(\hat{Y}\) with \(SS_{\rm{res}} < SS_{\rm{tot}}\) because the predictions of the model are closer to the outcomes than the mean outcome. So, as long as an intercept is present, the coefficient of determination is the square of the correlation coefficient:

Intuition for the coefficient of determination

To obtain an intuition about \(R^2\), we define the following functions with which we can plot the fit of a linear model. The ideal model would lie on a diagonal through the plot and the residuals are indicated as the deviations from this diagonal.

For example, compare the following models 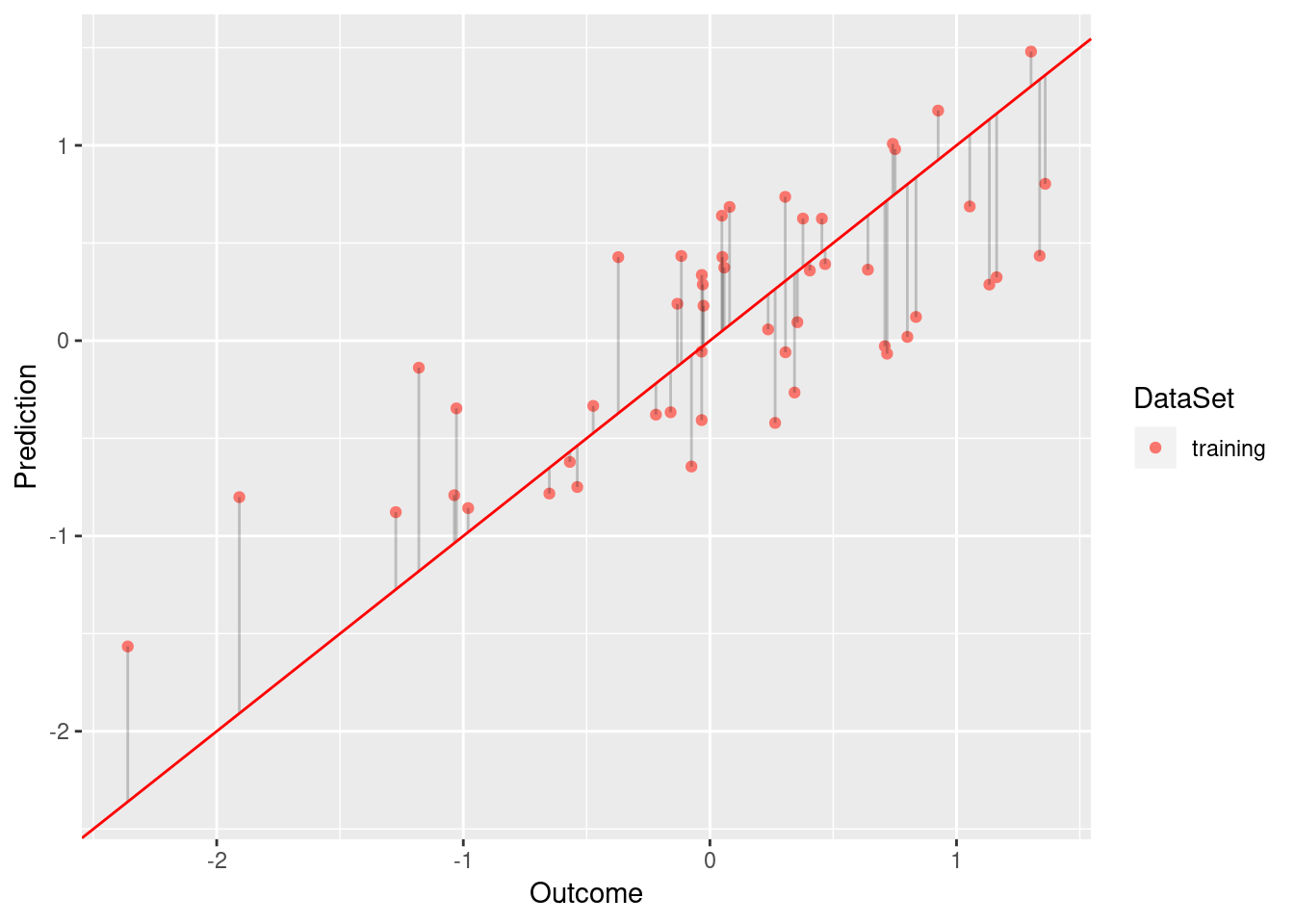 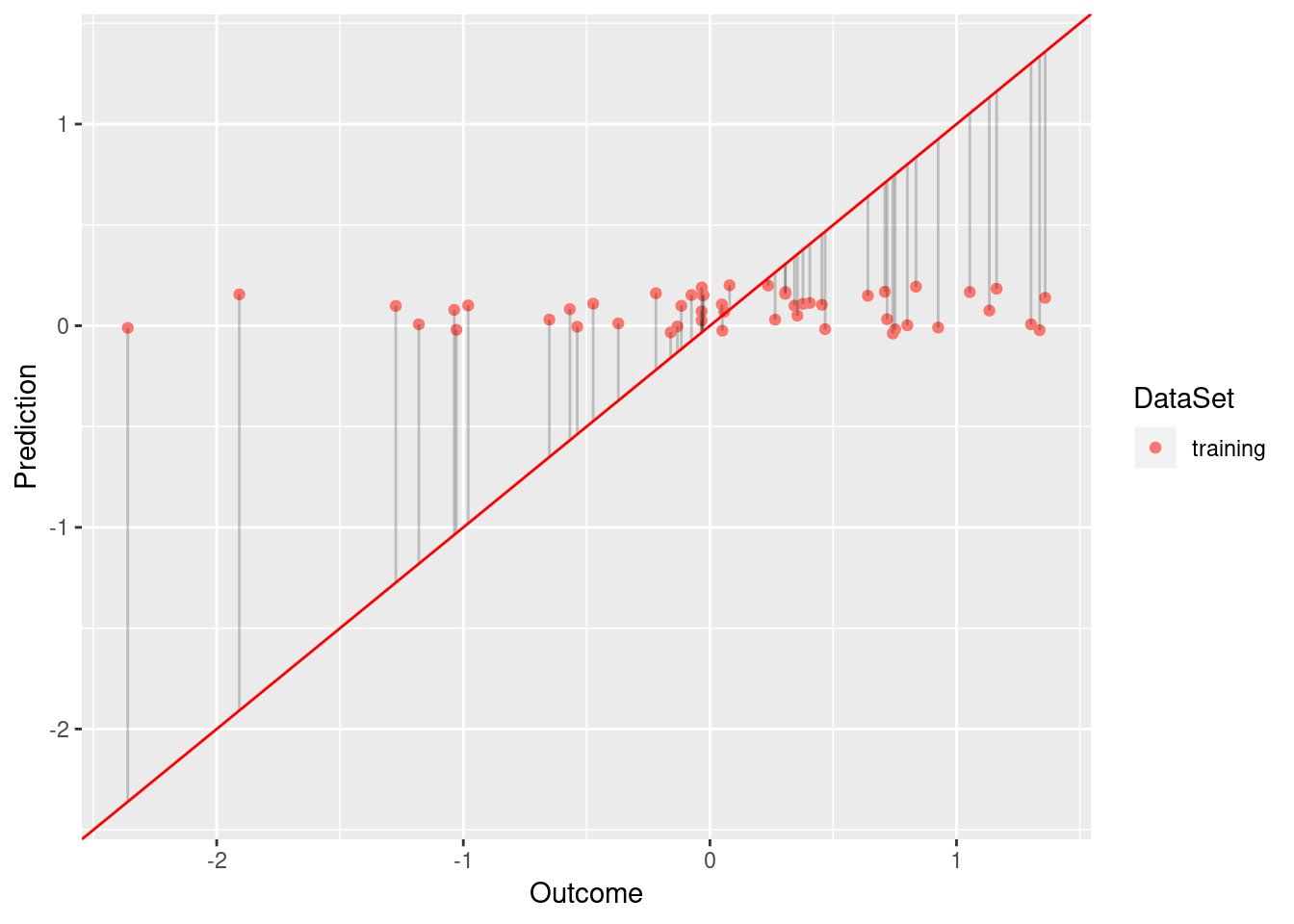 Blindly selecting a model solely based on R squared is usually a bad idea. First, R squared does not necessarily tell us something about goodness of fit. For example, consider data with an exponential distribution: 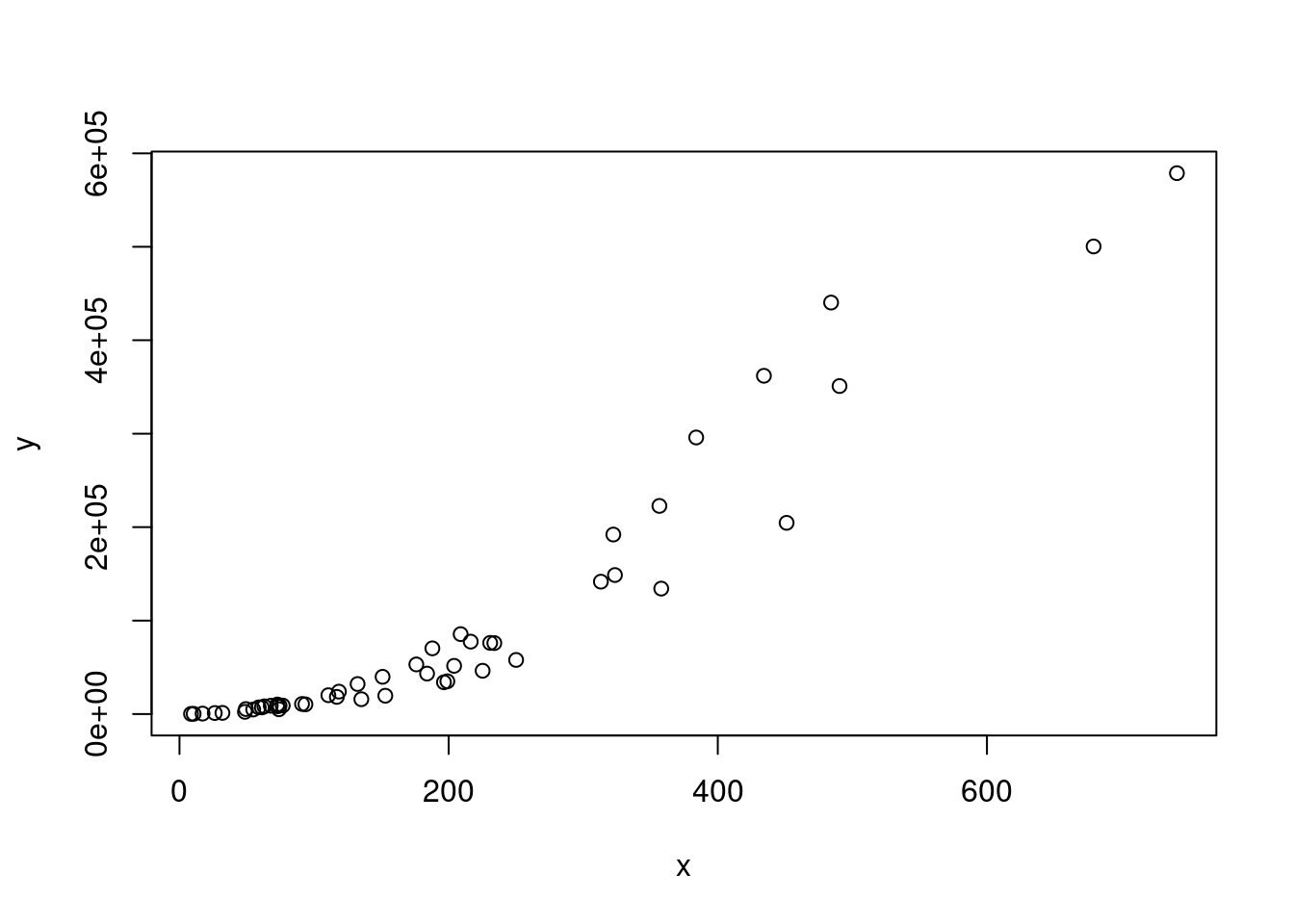 Let us compute \(R^2\) for a linear model fitted on these data:

As we can see, R squared is very high. Still, the model does not fit well because it does not respect the exponential distribution of the data.

Another property of \(R^2\) is that it depends on the value range. \(R^2\) is typically larger for wide value ranges of \(X\) because the increase in covariance is adjusted by the standard deviation, which scales more slowly than the covariance due to the \(\frac{1}{N}\) term.

As we can see, even though both models have similar residual sum of squares, the first model has a superior \(R^2\).

Accuracy vs sensitivity and specificity

Accuracy indicates the overall ratio of correct predictions. Accuracy has a bad reputation because it is unsuitable if the class labels are imbalanced. For example, imagine you want to predict the presence of rare tumors (class 1) versus their absence (class 0). Let us assume that only 10% of the data points belong to the positive class and 90% belong to the positive class. What would be the accuracy of a classifer that always predicts the negative class (i.e. that no tumor was found)? It would be 90%. However, this is probably not a very helpful classifier. Therefore, sensitivity and specificity are usually preferred over mere accuracy.

Sensitivity and specificity can be combined into a single quantity by computing the balanced accuracy, which is defined as

The balanced accuracy is a more suitable measure for problems in which the classes are imbalanced.

The area under the receiver operating characteristic curve

Scoring classifiers are classifiers that assign a numeric value to every prediction, which can be used as a cutoff for differentiating the two classes. For example, binary support vector machines would assign values greater than 1 to the positive class and values less than -1 to the negative class. For scoring classifiers, we typically want to determine model performance not for a single cutoff but for many cutoffs.

Using R, we can compute AUCs using the ROCR package. Let us first create a function for plotting the scores of a classifier as well as its AUC:

Using the plot, we can now demonstrate how the AUC behaves when the scores of a classifier allow for perfect separation and when this is not the case. 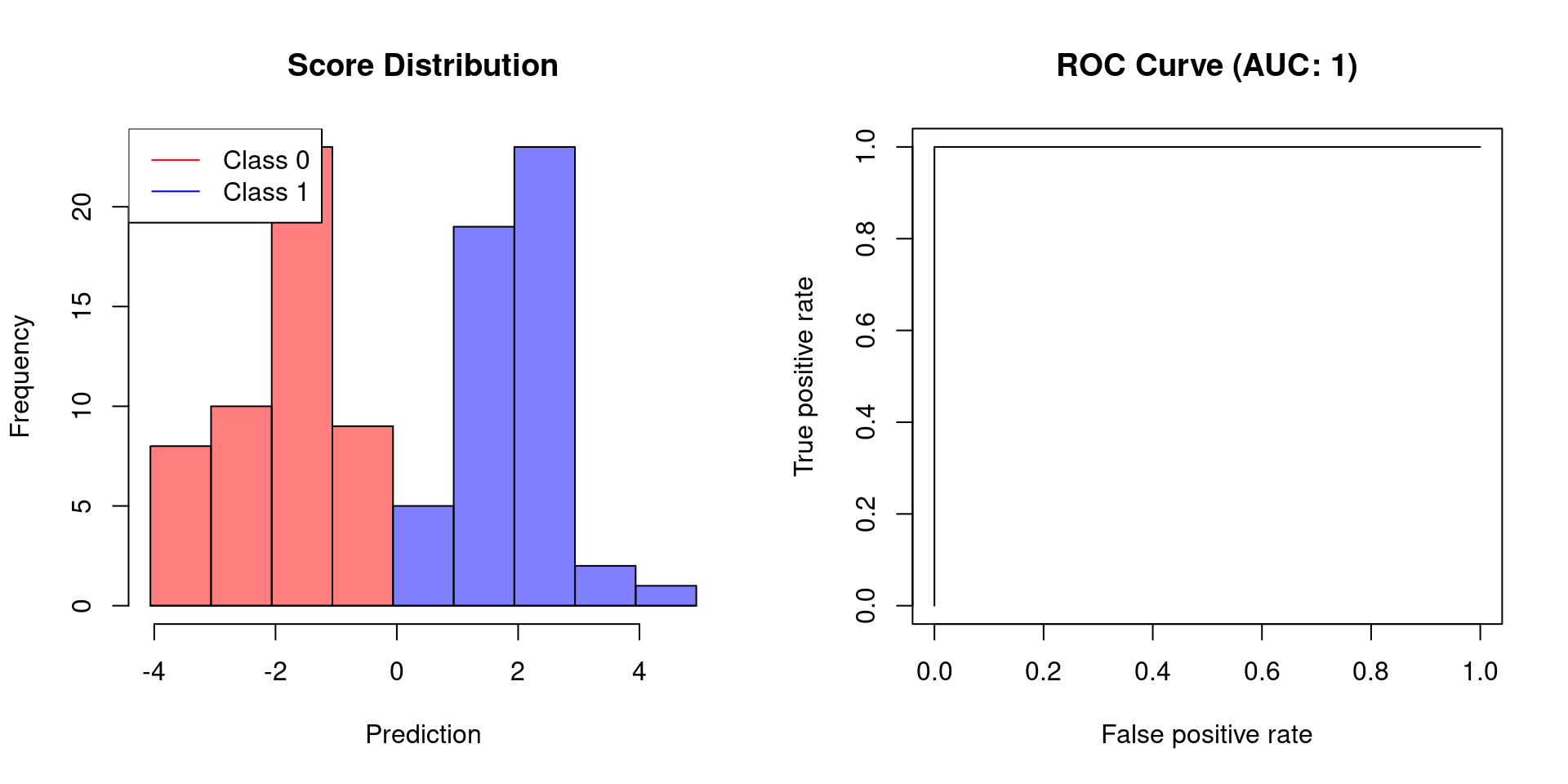 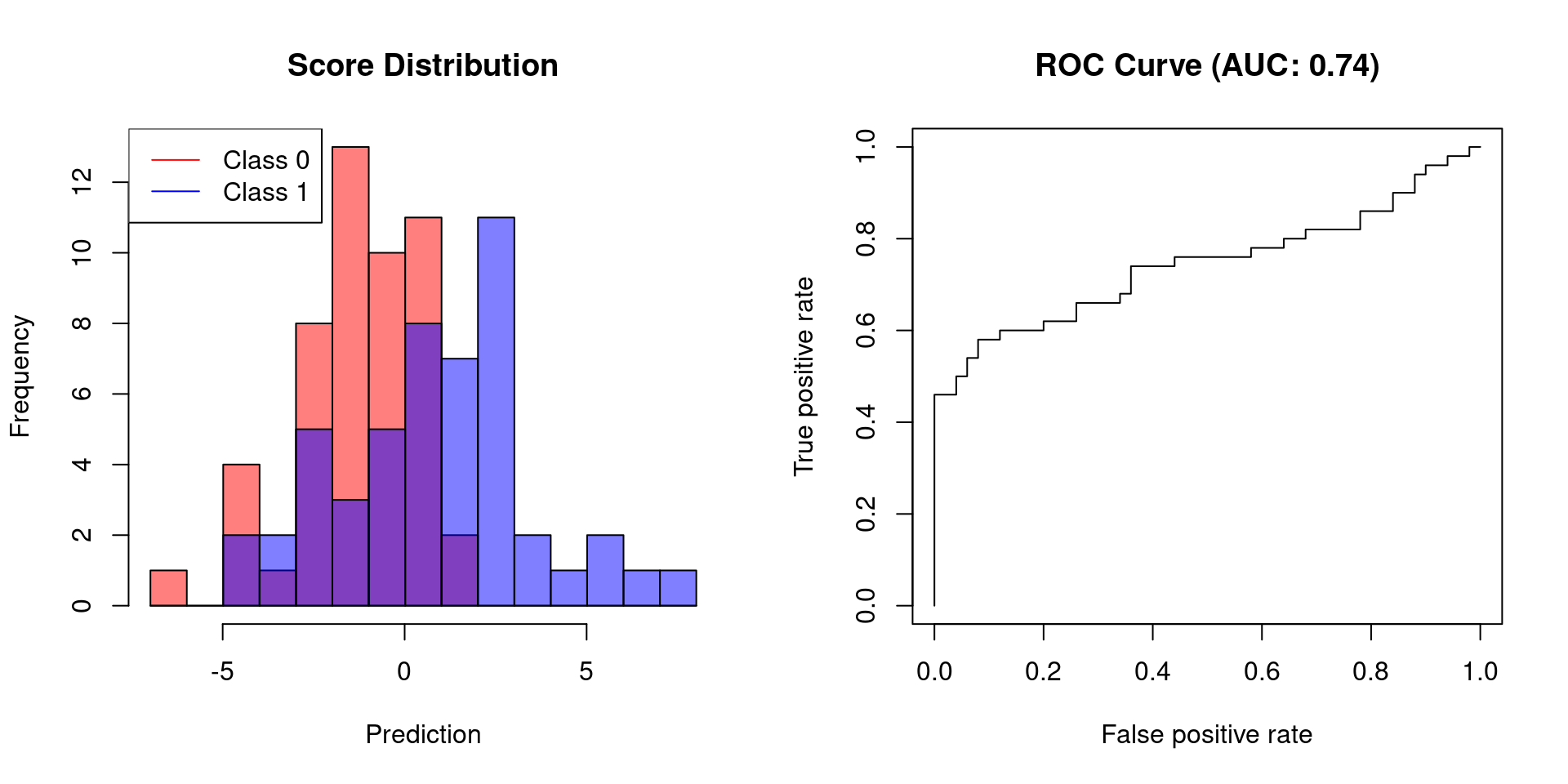 The first example shows that a classifier, which allows for perfect separation, has an AUC of 1. Classifiers that do not afford perfect separation need to sacrifice specificity to increase their sensitivity. Thus, their AUC will be less than 1.